A six-month investigation by The Sydney Morning Herald has found that the church misled the Royal Commission into Institutional Responses to Child Sexual Abuse by grossly undervaluing its property treasures in both NSW and Victoria while claiming that increased payments to abuse victims would require cuts to its social programs.

Where does the Catholic Church get its money?

What the church is really worth.

The investigation was based on intricate data from local councils that allowed more than 1860 valuations of church-owned property in Victoria. That showed that across 36 municipalities - including nearly all of metropolitan Melbourne - the church had land and buildings worth almost $7 billion in 2016. 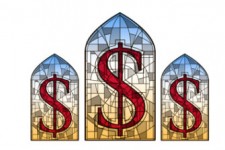 This put the Catholic church among the largest non-government property owners, by value, in NSW and Australia, rivalling Westfield’s network of shopping centres and other assets. It dwarfs all other large property owners.

"These figures confirm what we have known; there is huge inequity between the Catholic Church’s wealth and their responses to survivors," said Helen Last, chief executive of the In Good Faith Foundation.

"The 600 survivors registered for our Foundation’s services continue to experience minimal compensation and lack of comprehensive care in relation to their Church abuses. They say their needs are the lowest of church priorities.’’

The Herald’s findings come in the wake of the Royal Commission’s final report in December and raises serious new questions about the church’s decades-long bid to protect its assets and minimise compensation payments.

They also call into question the privileges the church enjoys, including billions of dollars in government funding each year to run services, exemptions from almost all forms of taxation, and minimal public accountability.

Monetary payments to abuse survivors have averaged just $49,000 under Towards Healing, the national compensation system established by the church in 1996.

The investigation included 40 Freedom of Information requests to local councils in Victoria, protracted negotiations for release of data from often reluctant authorities, and exclusive access to state government-owned information.

It identified church-owned properties across 36 municipalities - including nearly all of metropolitan Melbourne - with “capital improved values” (this includes land plus buildings) of just under $7 billion.

While the property portfolio features many churches, hospitals and schools, so too does it include offices, conference centres, car parks, mobile phone towers, tennis courts, and a restaurant.

The SMH used that data to extrapolate a conservative estimate of $30 billion in Catholic-owned property and other assets across Australia.

The church has a larger portfolio of assets in NSW than Victoria, with more than 160 church-owned nursing homes, more than 550 schools, and close to 400 parishes. Queensland is also an important centre with a large network of parishes, schools, hospitals and nursing homes.

The church also has extensive non-property assets including Catholic Church Insurance and its own internal banks - often known as Catholic Development Funds - with nearly $1 billion in assets in Sydney alone.

And it has other investments, including in superannuation, telecommunications and in the stock-market. A Church-owned fund manager has more than $1.4 billion under management.

A Sydney Archdiocese spokeswoman said the church was “more than just buildings” and was significantly involved in providing pastoral care and “social infrastructure”, including schooling, education, healthcare and welfare services.

“It is principally its people and their works. It cares for the most disadvantaged and is a voice for the voiceless. It provides most of these things for our whole society, Catholics and non-Catholics alike. If the Church wasn’t doing it, who would?”

The church is notoriously secretive about, and protective of, its wealth. Church leaders have repeatedly publicly underestimated church wealth and resisted greater financial accountability.

Documents provided to the Royal Commission show that the Sydney Archdiocese valued its properties at historic cost, that is the amount paid for properties when originally bought, often in the 1800s or early 1900s.

“This must understate the (Sydney) Archdiocese’s net asset position,’’ the Royal Commission noted.

The figures provided by the Archdiocese, which disclosed about $1 billion in assets, also excluded the value of schools and local parishes, vastly understating its true wealth.

The Archdiocese spokeswoman did not respond directly to a question on whether it had under-stated its wealth to the royal commission but said it had complied with the law.

“As a charitable organisation it is important to remember we hold most assets for missionary purposes, not for profit,’’ she said. “It seems there are some who see the Catholic Church merely through the prism of assets and property, reporting and regulation.”

The Melbourne Archdiocese also undervalued its property to the Royal Commission, and in 2013 failed altogether to provide assets information requested by a state parliamentary inquiry.

Catholic Church finances are complicated by an ancient, disaggregated structure that has allowed Church leaders to sidestep questions about overall wealth and made it notoriously difficult for abuse survivors to identify a defendant to sue for damages.

The SMH acknowledges the complex network that makes up “the Church”, which includes 28 administrative dioceses and dozens of religious orders across the country.

But the Church also often presents itself as a single institution. In one internal publication, the Church is described as “one of Australia’s largest employers” with a staff of 220,000 people across 3000 agencies.

Many researchers have attempted to estimate the wealth of the Church in Australia and globally, but the efforts have been stymied by a lack of reliable financial data.

But in 2013, in response to the Black Saturday bushfires in Victoria, the state government introduced a fire services levy that applied to all landowners including, for the first time, churches. Properties affected have to be valued to ascertain the appropriate levy. NSW does not have an equivalent fire levy.

In evidence to the royal commission, the church repeatedly warned that boosting compensation payments to victims could lead to cuts to social programs.

HOW WE DID THE CALCULATIONS