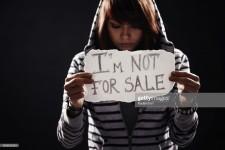 DARJEELING, India (Thomson Reuters Foundation) - Two Indian schoolgirls will be awarded national bravery awards next week for helping police bust a cross-border human trafficking racket, leading to the arrest of suspects in the cases of missing girls from both India and Nepal.

Shivani Gond, 17, and Tejasweeta Pradhan, 18, will be honored by Prime Minister Narendra Modi for "showing exemplary courage" when acting as decoys to gain the trust of the traffickers, allowing police catch them red-handed.

The girls, both from the hill district of Darjeeling in West Bengal, befriended the traffickers on Facebook in May 2016.

They then spent days communicating with them by telephone, convincing the traffickers that they were willing to run away from home before leading them to the police.

West Bengal is among the top three states where traffickers lure young girls from poor families with the promise of good jobs, instead forcing them into the sex trade or into domestic servitude, campaigners say.

Traffickers also targeted the two schoolgirls Gond and Pradhan, but were unaware that they were part of an operation jointly organized by police and non-profit organization Mankind in Action for Rural Growth.

"When we spoke to them, they very openly told us that we would be required to meet the sexual needs of our guests," Gond told the Thomson Reuters Foundation.

"They asked to see our photographs, to make sure we were pretty girls. I was a little scared but we did everything they asked us to because we had to gain their trust."

The National Bravery Awards are given to around 25 children between the ages of 6 and 18 every year.

The recipients, selected from across India, are given a medal, certificate and a cash prize. They also receive financial assistance to complete their schooling.

While children have won awards for foiling robberies, fighting off armed intruders, rescuing people from drowning, saving lives in a stampede and putting out fires, this is the first time one has been given in a human trafficking case.

Many parents do not give consent for their children to be involved in anti-trafficking operations.

"I also hesitated, but then realized that it was our only shot to get the traffickers," said Kamlesh Rai, Pradhan's mother and a school teacher.

The police got their first breakthrough with the arrest of a woman who had travelled to New Jalpaiguri to pick up the girls.

Her arrest led police to a missing girl from Nepal as well as a trafficking gang and a sought-after suspect in New Delhi.