Background: A definitive treatment of SARS CoV-2 is yet to arrive and the human death toll rises exponentially globally. In this health emergency, it might be useful to look into the old therapies which could be effective against the virus. In vitro research showed Ivermectin could decrease the concentration of coronavirus 4000 to 5000 folds in living lung tissue.

Aim: In this prospective study a combination of Ivermectin and Doxycycline will be evaluated therapeutically to treat COVID-19 patients. Methods: 100 COVID-19 patients were enrolled in this study with a predefined inclusion and exclusion criteria. RT- PCR of the SERS-CoV-2 will be done at designated government hospitals. The clinical features and response to treatment were noted according to a dedicated protocol.

Results: In this study male and female were 64 and 36 respectively, the age ranged between 8 to 84 years. Retesting was done between 4 and 18 days of starting medication. All patients tested negative and their symptoms improved within 72 hours. There were no noticeable side effects.

The Children - Part One

This is the first letter in a long chain of correspondence between Dr Pridgeon and the Queensland Minister of Child Safety, while he was desperately trying to rescue these children from the custody of their abusive father.

This letter has been widely cc’d to any person who may have been in a position to help these children: THEY ALL KNEW BUT NOBODY DID ANYTHING.

A commonly heard response was: “why didn’t you just go the Police/Child Protection/the courts?”. The answer is: because they use any excuse NOT TO ACT.

Criminal lawyers will tell you, in unguarded moments, that in practical terms, incestuous child sexual abuse is no longer a crime. Considering the terrible life long consequences for the abused child, this statement seems appalling, but a moments reflection will create realisation that it is a realistic and true statement: it is a nearly impossible task to prosecute the perpetrator of incestuous sexual abuse in Australia.

AFP linked to family court paedophilia, as concerns amongst the community grow.

Operation Noetic is not about a "Criminal Syndicate Abducting Children".  It is about paedophilia and the family court supporting it, instead of keeping our children safe. It's about magistrates and court experts and independent independent children's representatives continually making recommendations that a child spend time with a person who has been convicted of child sex abuse, or where the court has found overwhelming evidence of it, or where the paedophile has already admitted it.

Paedophile Contact with Victim-Children in the Family Court of Australia is a very real and serious issue, and there’s a few case references to get you started at the bottom of this message.

Paedophiles access and custody to victim- children IS NOT A MYTH concocted by “Jilted Mothers” to “get even” with the fathers.

The recent arrests by the Australian Federal Police surrounding the “Criminal Syndicate of Child Abductors” known as Operation Neoctic, as reported by mainstream media is nothing more than a state sanctioned witch-hunt to protect the paedophile-sympathiser judges in the Family Court of Australia.

Dispelling the myth of gender bias in the family court system

Below are a few stats from a Pew Research Center analysis of the National Survey of Family Growth (NSFG) released in June of 2011.

According to the report, a married father spends on average 6.5 hours a week taking part in primary child care activities with his children. The married mother spends on average 12.9 hours. Since two-income households are now the norm, not the exception, the above information indicates that not only are mothers working, but they are also doing twice as much child care as fathers.

It only makes sense that mothers who have a closer bond due to the time spent caring for a child be the one more likely to retain primary custody after a divorce.

Cartel lawyers in Goulburn are quickly closing rank in an effort to stifle the smell of corruption that currently emanates from the NSW children's court.

Intimidating letters meant to threaten victims and their families into silence are still flowing from solicitors who have no idea of the incoming tsunami heading their way in epic proportions.

And so the evidence continues to pile up in favour of those who have had their families ripped apart in order to fill the pockets of those who reap the rewards whilst victims have suffered in silence for far too long.

Cartel activities are finally being exposed in Goulburn district, with irrefutable evidence that hopes to shine a light on those who traffick children under the nose of the taxpayers who honestly believe child protection is not a business. 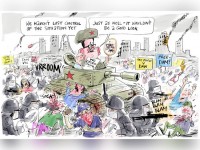 Whilst the media is continually downplaying the side-effects of the clot-shot, authorities are claiming that myocarditis is extremely rate and seems to be more linked to young males.

However recent VAERS reports confirm that while young men are suffering vaccine-induced myocarditis as a side-effect from the jab, what they are not reporting on is the amount of middle-aged women who are coming down with myocarditis after the clot-shot.

The figures are staggering and it beggars belief that our government is either completely stupid or deliberately not informing women of the serious adverse events they may suffer as a result of being coerced/tricked into having this extremely unsafe gene-therapy being passed off as a "vaccine".

In fact, in most age ranges, the cases of vaccine induced myocarditis in women are up to 5 times higher than that being reported in men.

One has to wonder if there is a reason that this information is not only being withheld from dissemination, but why not one female expert on covid vaccines - and there's a heck of a lot of them today, are standing up and calling this out.  It's serious and needs to be brought to the attention of those pushing the clot-shot.

During a recent interview on the Laura Lynn show, Dr. Charles Hoffe, MD — who practices in British Columbia, Canada — explained in very simple terms how the mRNA COVID vaccines create the spike proteins which cause widespread microscopic blood clotting that will eventually kill many people within three years of taking the shots. “The worst is yet to come,” he claims.

Of course, as it is becoming more and more obvious how these mRNA vaccines are ticking time bombs, the mainstream media is running stories blaming the blood clotting problem on the COVID virus itself — not the vaccines.

That said, we have transcribed Dr. Hoffe’s comments here — see the video interview below:

Guardianship prisoner June Lynne Lacey Bill has Do Not Resuscitate orders taken out against her and her families will.

June Lynne Lacey Bill - Guardianship prisoner with Do Not Resuscitate orders against her will - killed by by guardian who placed another 100 victims on DNR orders against their will.

June was put into guardianship when her daughter (and Power of Attorney) refused to sign a Do Not Resuscitate order at the hospitalist's request. June Lynne Lacey was taken prisoner due to a petition by social services and the hospital to remove her rights.

'She was forced into a nursing home against her will and against her family's wishes. When she protested, she was drugged and forced to take a 210 mile ambulance ride to a nursing home far from her home. She was not permitted to have a phone, not allowed to use a commode (forced to use only a bed pan), not allowed outside and given only day old food.

Within less than a month, she developed pneumonia, a staph infection, septic blood, a urinary tract infection, bedsores and a fever of 102! With an extraordinary will to live and with many prayers and faith in God, June miraculously recovered, only to be put in hospice by social services. She was forced to take oxycodone, which made it hard for her to breathe and swallow, caused an irregular heartbeat, migraines and seizures and gave her intense stomach and chest pain with horrific constipation and nauseousness!

She and her family begged to get rid of the oxycodone, but hospice and social services insisted she take it and refused her medical attention when it made her so sick! Consequently, June died! No one should be forced to die against their will and their families wishes. Health Care Directives should always be upheld and those with Power of Attorney should not be cast aside.

Please support the JUNE LYNNE LACEY BILL to ensure those most vulnerable amongst us are protected and their United States Constitutional rights upheld. (For more info go to junelynnelaceyfoundation.com.)  June's rights were stripped from her. She has no right to life, liberty and the pursuit of happiness. Her freedoms were taken away, she was taken prisoner and received NO JUSTICE! PLEASE SPEAK OUT AGAINST THIS INJUSTICE! "-- Joyce Lacey

The town of Roebourne in the north of Western Australia has one of the world's highest rates of child sex abuse.

An Australian town is in the grip of a paedophile epidemic with 90 per cent of school-age children suffering abuse, police have warned.

Thirty-six men have been charged with more than 300 offences against 184 children after an investigation uncovered a "staggering" rate of abuse in Roebourne, Western Australia.

Family Law Think Tank on Serene Teffaha from Advocate Me

Serene Teffaha, principal solicitor at law firm, Advocate Me, allegedly in closed court submissions during a matter before the magistrates court in Brisbane, accused the Family Court and its judiciary and police of enabling abuse of a child.

Ms Teffaha has taken a few jabs at the Family Court at rallies in Melbourne. On at least one occasion she has labelled the court as "corrupt".

Now the Victorian Legal Services Board has cancelled her practising certificate and she is unable to practise law. The board has not said what led to the cancellation. Effectively, she cannot operate her business and has no way to support herself.

Brisbane magistrate, Anthony Gett referred Ms Teffaha to Victoria's Legal Services Commission over submissions in court that he said “may be prejudicial to or diminish the public confidence in the administration of justice”.

It's not the first time that someone has called the Family Court a bad name.

Is there a Criminal Cartel operating in Goulburn?

Businesses that make agreements with their competitors to fix prices, rig bids, share markets or restrict outputs are breaking laws and stealing from consumers and businesses by inflating prices, reducing choices and damaging the economy. [i]  Some estimates suggest that while a cartel is operating, the price of affected commodities rises by at least 10 per cent. Worldwide, cartels steal billions of dollars every year. [ii]

In Goulburn NSW, there are three lawyers designated to work on the NSW Children’s Court Care Panel.  Lawyers on the “Care Panel” are specifically trained to deal with care and protection matters in NSW.  For remote and rural areas, where care and protection proceedings have been instituted by the state, one lawyer is allocated to the children in the case, one is allocated to the department and the other will be the duty lawyer, in which will take on the case for the parents.