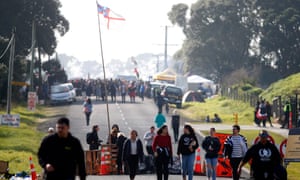 Māori leaders are staging two major protests in New Zealand, straining relations with the Labour coalition government and drawing accusations that Jacinda Ardern – who is visiting the remote Pacific territory of Tokelau – is a “part-time prime minister”.

On Tuesday, hundreds of activists marched on parliament house in Wellington, as well as other New Zealand cities, calling for an overhaul of the government’s child welfare agency, Oranga Tamariki [Ministry for Children], amid a series of controversial cases in which Māori children and newborns were taken into state care.

In the 2017-2018 year, 290 Māori babies were taken into care, and Māori children make up more than 50% of all children in state care. Māoris make up 14.1% of the population, according to the CIA World Factbook website.

On their website, Oranga Tamariki states: “We are aware that tamariki [children] Māori are disproportionately affected and represent the largest group of children that come into our care.” The most common reasons babies are taken into care are substance abuse and addiction of parents, medical neglect of the baby, and family violence.

Meanwhile a standoff between activists and developers continued at Ihumātao. Hundreds of protesters have occupied land in the South Auckland suburb of Mangere which is slated for a major private housing development.

The Māori settlement of Ihumātao dates back to the 14th century, when vegetable gardens were established by Polynesian settlers. Amid a growing Auckland housing crisis, land at Ihumātao was sold to Fletcher Building in 2016, with plans to develop 500 residential homes. Protesters occupying the site say Ihumātao is too precious to lose to development, but Māori groups are not united in their opposition, with some close to Ihumātao saying the housing development could be good for their families. Well-respected elders accompanied police last week asking for the occupation to end.

The chief executive of Fletcher Building Residential, Steve Evans, said the company had committed to returning 25%, or eight hectares, of the land back to Māori and the building project would take due care with the significance of Ihumātao.

However, the numbers at Ihumātao have continued to swell, with people travelling from around the country to join, and many taking time off work and children out of school to participate. 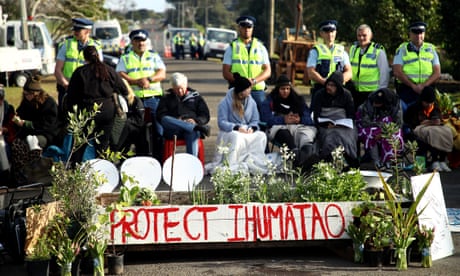 The voting support of the Māori people is significant for Ardern’s Labour party, and expectations are high for the coalition government to deliver for Māori. A number of senior cabinet members are of Māori descent.

Ardern has spent most of the week in the remote New Zealand territory of Tokelau, a 22-hour sea journey from Samoa and 3,500km from New Zealand.

Ardern’s visit to Tokelau is the first appearance by a New Zealand prime minister in 14 years, and Ardern said it was important to show her face to the 1,500 New Zealand citizens and to consult them on whether they wished to move towards independence.

But back in New Zealand, anger has been growing at the state of child welfare. Activists say the state intervention in Māori families reeks of racism and a dark colonial legacy, reminiscent of Australia’s “stolen generation”. An open letter titled “Hands off our Tamariki” has been signed by more than 17,000 people.

The letter reads: “Successive governments have been seriously remiss in fulfilling its obligations to our people. We must challenge the state abuse of tamariki and whānau, past, present and future. There has been too much inaction for too long.”

Last month the children’s commissioner, judge Andrew Becroft, launched an investigation into Oranga Tamariki, saying he was deeply disturbed by the routine removal of Māori children.

“Our enduring legacy of colonisation and contemporary systemic racism has long affected decisions made by not only child welfare services, but all New Zealand agencies for decades. There’s no getting away from it. It’s a confronting message for New Zealand, but it’s one we can’t avoid and we’ve got to face up to it,” Becroft said.

Dame Tariana Turia, former co-leader of the Māori party, was one of the protesters who marched on parliament house on Tuesday, and called the child removals “disgraceful”. Turia was removed from her mother as a baby.

Oranga Tamariki chief executive Gráinne Moss acknowledged the protest groups but said: “We all want the same thing … and that’s for children and young people to be safe and loved.”

At the Ihumātao standoff, Ardern has asked developer Fletcher Building to halt work until a solution can be reached. While the company has obliged, the prime minister has been criticised for failing to visit the site. Protesters said they wanted the government to buy the land and preserve it – a proposal the crown said would set an unsustainable precedent. Acting prime minister Kelvin Davis said the government’s Māori MPs were on standby to travel to Ihumātao in Ardern’s absence.

Protest leader Pania Newton described Ihumātao as “the revolution of our generation”.

Since taking office in 2017, Ardern has frequently been accused of being more focused on the international stage than domestic affairs. This perception has been exacerbated by her global popularity and frequent media appearances, including one in the upcoming September issue of Vogue.